Farm Innovations Drive Sustainability for the Next Generation

MANILA, Philippines — Even before COVID-19, Diabetes has been among the leading causes of death in the Philippines.

The World Health Organization (WHO) noted that about 422 million people worldwide have diabetes, majority of which lives in low-and middle-income countries, and 1.5 million deaths are directly attributed to Diabetes each year. Both the number of cases and the prevalence of Diabetes have been steadily increasing over the past few decades.

In the Philippines alone, an annual increase of 7.8% among Filipinos has been recorded based on 2020 data from the Philippine Statistics Authority.

Among those that suffered from Diabetes was a sibling of entrepreneur Maura De Leon. As natives of Pandi, Bulacan, they would have enjoyed the province’s many delicacies, including desserts such as Pastillas de Leche.

But having a sweet tooth took a toll on Maura’s sibling. After her sibling lost a leg to Diabetes, De Leon went on a mission: To find a solution on how diabetics like her sibling could still enjoy sweets and life without sacrificing their health.

Through research, De Leon learned from a friend about Stevia, a short plant from the chrysanthemum family native to Brazil and Paraguay. It is about 100 to 300 times sweeter than sugar, but has no calories or carbohydrates, making it a popular sugar alternative, especially among diabetics.

De Leon did not waste time and sought help from friends and family to bring Stevia species from Paraguay to the Philippines. De Leon came from a family of farmers, but she soon found out that growing Stevia was not for any “plantita.”

Since the plant is not endemic in the Philippines, not only that it grows better in big farms than in pots. Many farmers tried to grow the plant, but to no avail.

Yet De Leon was determined to succeed – so for five years, she toiled to make the plant grow and thrive, constantly changing soils and even partnering with the Department of Agriculture and Department of Science and Technology.

In 2004, De Leon finally unlocked the key to growing Stevia in the Philippines, and she marked her glorious moment by literally naming her company Glorious Industrial and Development Corporation (GIDC). Maura has since been dubbed as the country’s “Stevia Queen.”

According to Cecile Miciano, GIDC Marketing Manager, from being the first to grow Stevia in the country, GIDC has also become the country’s first Stevia manufacturer with its own brands of products such as Sweet and Fit Stevia, claimed to be the first stevia herbal dietary supplement registered by the Food and Drug Administration (FDA).

“Stevia has been touted as a safe and healthy sugar substitute with proven health benefits. It can sweeten foods, and it has several health benefits, including decreased calorie intake, lower blood sugar levels, and less risk of cavities,” said Maura.

“Before, stevia was restricted to the health food market without any FDA approval. With recent developments in technology, it is now widely used as a substitute for artificial sweeteners in many products. USFDA considered Stevia as GRAS (Generally Recognized as Safe).”

While it has zero calories, Stevia is 200 times sweeter than refined sugar and does not affect blood sugar. It is a popular option for people wanting to lose weight but with reduced sugar intake.

Apart from weight loss, studies have shown that Stevia could prevent signs of aging like wrinkles, as well as reduce acne, fight eczema or dermatitis, and revitalize the skin. As such, from food and beverage mixes, GIDC has expanded to include beauty and personal care products peppered with their prized plant.

Yearning to explore Stevia’s uses even further, Maura planned to open a café offering landmark cuisine from her hometown Bulacan – but everything sprinkled with Stevia, of course.

“When the pandemic arose last year, we were also one of the companies that were affected. But with vision and mission in mind, we are able to cope up to continue manufacturing and distributing healthy products to our Filipino consumers by strictly following government health protocols,” she shared.

Last year, her plan finally materialized and thus born Karilagan Stevia Farm and Pavilion in Bocaue, a mix of indoor and outdoor spaces offering a taste of Stevia farm life and food.

Karilagan, which means “natural beauty” in Bulacan, was also the name of Maura’s embroidery business. Apart from food and history, Bulacan has been known for embroidery. As such, old sewing machines and other antiques from Maura’s embroidery company accentuate every table in the recently opened restaurant.

The pavilion is adjacent to a quaint Bahay na Bato, again a homage to Bulacan traditional home architecture. The Bahay na Bato, which is open for overnight accommodations, overlooks the patio and De Leon’s expansive green houses and farm, where guests are free to roam to take pictures and even pick vegetables.

Since the fruits and vegetables in the farm were fertilized with Stevia, and some of the poultry also fed with Stevia, Karilagan restaurant’s food is usually sweeter than usual – but safe for everyone, even diabetics, assured the farm and pavilion’s manager Rocky Esperidion.

As such, what makes the restaurant also unique is it does not hand out menu cards to guests. Dining in the café is by reservations only and even taking out should be advised three to four days prior because its day-to-day menu depends on whatever is available from the farm.

Using fresh produce from the farm to prevent spoilage, the restaurant’s farm-to-table menu includes what Esperidion claimed to be dishes that represent the “best of the best” of Bulacan – Sinabawan ng Karaligan, Napapanahong Ensalada, Gulay ng Karilagan, Tsokolate at Batirol, and desserts like Polvoron, Maruya and Crispy Suman. 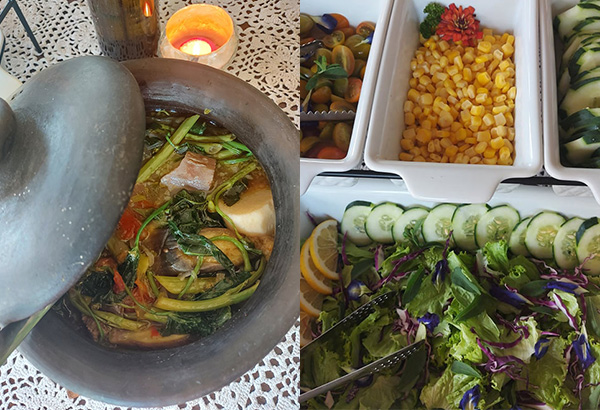 For now, the Heritage Menu launched last February 25 boasts of seven main dishes such as Bulacan Sisig with added Chicharon for crispiness – but not all crispy as it is balanced with chewy soft Sinusong Baboy (pork breast). On the other hand, native chicken is used in Tinola sa Papaya and Tinola sa Malunggay.

Meanwhile, the Native na Adobo ni Impo is a De Leon heirloom recipe handed down from different generations. But for the Gen Z, there are new twists such as Stevia Pasta and Malunggay Pesto. 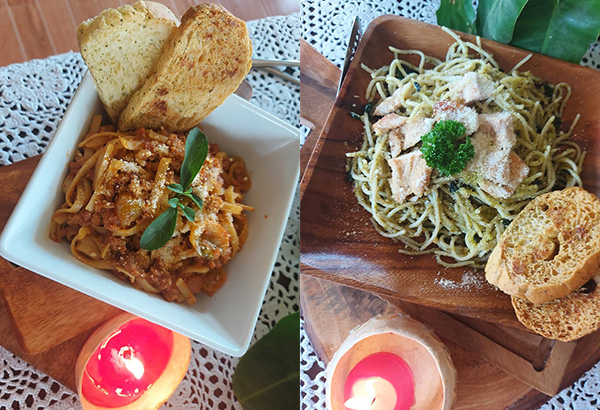 For “Minanda” (Bulacan term for “snacks”), there are the likes of Churros, Pancit, Tinumis (Dinuguan) at Puto and Stevia Buns that also comes in playful flavors like cheese. For events, the restaurant also serves a dessert buffet all completely sweetened with Stevia. The restaurant is open from 11 a.m. for lunch and 6 p.m. onwards for dinner, for middle-class to high-end diners at P1,000 per head or P500 to P600 per person per order. Set menus for two, four to five and groups of 10 are also available. Occasionally, there are also promos like free Stevia coffee and Batirol hot chocolate for diners. Thanks to Stevia, diabetics, too, can now enjoy sugar-free milk tea and ice cream. 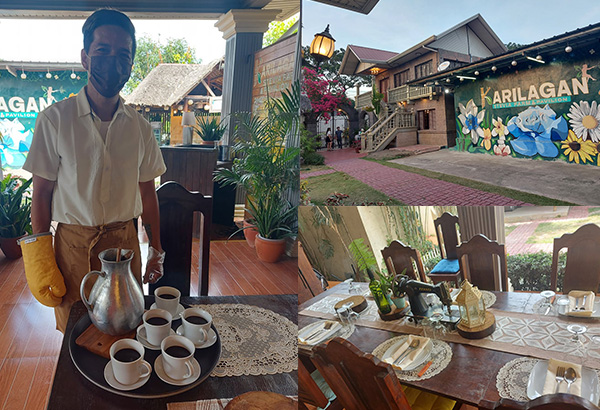 For summer, Esperidion shared that they proposed to offer boodle fight menus as well as overnight packages with camping tents, food and massage from local masseuses – to help the local community of mothers that need extra income.

Apart from the farm and the restaurant, it also possible to arrange try-outs at the nearby Delta Lions Shooting Range, which literally completes the provincial life experience as it was among the training sites of the cast of hit action TV series “Ang Probinsyano.”

Like her, Maura invites others to also embrace the “Ang Probinsyano” (provincial) life.

“I highly encourage other entrepreneurs to also invest in agriculture. Why? Aside from the fact that there’s a growing demand for sustainable food, we are in an agricultural country and yet our farmers are the most neglected sector in our society. Let’s help them to improve the quality of their lives.  My wish and prayer are to pass it on from generation to generation so that the Filipino farmers will be proud of who they are and what they do.  Let us keep our Filipino pride alive by helping each other out. And hopefully, we will be able to grow local, go global,” she said.

Farm Innovations Drive Sustainability for the Next Generation