How close is hydrogen to being a viable farm machinery fuel?

As farming comes under increasing pressure to go green, jumping through the many confusing legislative hoops to meet net-zero targets can often feel like rocket science.

According to nanomaterials specialist and space station engineer Vivek Koncherry, this may be exactly what the industry needs – particularly when it comes to the future of farm machinery.

Based in Manchester, Dr Koncherry heads up several projects at the Graphene Engineering Innovation Centre, and is currently working on creating hydrogen storage systems to be used in habitable space stations destined for life beyond Earth.

These same hydrogen technologies can be used in farm machinery to replace combustion engines and cut emissions, without the complications that come hand-in-hand with heavy electric vehicle batteries.

Making the farming sector the test pilot for his space-bound projects, Dr Koncherry says that hydrogen is one of the most abundant chemical elements in the universe, accounting for around 75% of its overall mass.

Hydrogen is one of the most promising resources in a carbon-neutral future, but, sourcing and containing it still poses several challenges.

Mechanically, the technology for running hydrogen vehicles and machinery already exists, and Dr Koncherry has been working on a system that can be retrofitted to tractors.

The setup will include hydrogen fuel cells, tanks, a small battery, and an electric motor to create what is known as a fuel-cell electrical vehicle, or FEV.

“There are tractor manufacturers I’ve spoken to that tried hydrogen maybe 10 years ago, and the problem was not to do with making the tractor, or even the associated prices for farmers,” says Dr Koncherry.

“The issue was about how the farmer can source the hydrogen to fuel the machine, and this is still the problem that we need to solve today.”

The issue is that producing the grey and blue types carries a worrisome carbon footprint, and the eco-friendly green hydrogen is both hard to come by and hard on the pocket, with costs that will unfortunately be passed to the farmer.

Further challenges arise in trying to store and contain it, as hydrogen can leak out of ordinary metal storage containers. This causes a logistical nightmare when it comes to infrastructure, as without a means of storing and containing the hydrogen, it has not been considered a viable option.

“This is why we use graphene in our storage vessels,” explains Dr Koncherry. “Graphene is a single layer of graphite, that is 200 times stronger than steel, and is the best electrical and heat conductor. In the case of pristine graphene, even hydrogen cannot pass through it.”

Engineering these graphene containers has proven an enormous step forward in making hydrogen a more accessible and viable fuel source for both agriculture and the automotive industry. 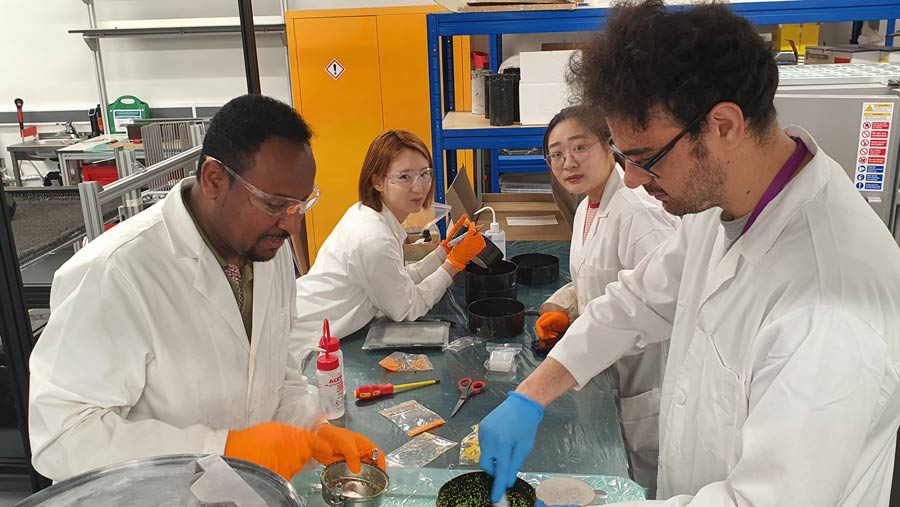 Though infrastructure in the UK is still lacking, the system has been proven in countries such as South Korea and Japan, where sales of hydrogen-powered vehicles have reached the tens of thousands.

At the moment, the hydrogen-fuelled movement is being led overseas, where the means for storage, transportation, filling and pumping have already been established, But the UK remains at the forefront of research and development.

“We have the cutting-edge technology in the UK to make it a reality, but we need to commercialise it faster.

“There are companies working around the world to reduce the cost of green hydrogen, but they are but not quite there yet” said Dr Koncherry.

The Future of Food & Agriculture

Farmers Weekly worked with the following partners to bring The Future of Food & Agriculture exhibit, showcasing the career opportunities in our dynamic, cutting-edge industry to more than 25,000 non-farming visitors interested in science and technology.

Soy production to increase in Europe in the future