(BIVN) – The Hawaiʻi Department of Agriculture has released an update to the 2020 Agricultural Land Use Baseline Study.

The baseline study uses various maps and graphs to paint an island-by-island picture of agriculture in Hawaiʻi, “intended to help industry, government and the community in making decisions that affect agricultural land use in the state.”

From a Department of Agriculture news release:

The 2020 updated reports and the 2015 report were completed under contracts with the University of Hawai`i at Hilo’s Spatial Data Analysis and Visualization Lab (SDAV) which used Geographic Information System technology and aerial imagery from several sources to digitally document the footprint of lands engaged in commercial scale agriculture statewide. Both reports are available on the HDOA website. The GIS metadata for both the 2015 and 2020 reports are available on the State Office of Planning’s Geospacial Data Portal (Land Use & Land Cover)

“The agricultural baseline reports are valuable in tracking the state of agriculture in Hawai`i and provides a gauge to long-term planning for the future,” said Phyllis Shimabukuro-Geiser, chairperson of the Hawai`i Board of Agriculture. “The 2020 baseline data will help determine the impact of the COVID-19 pandemic in future years and may help to develop early responses to local, national and global crises.” 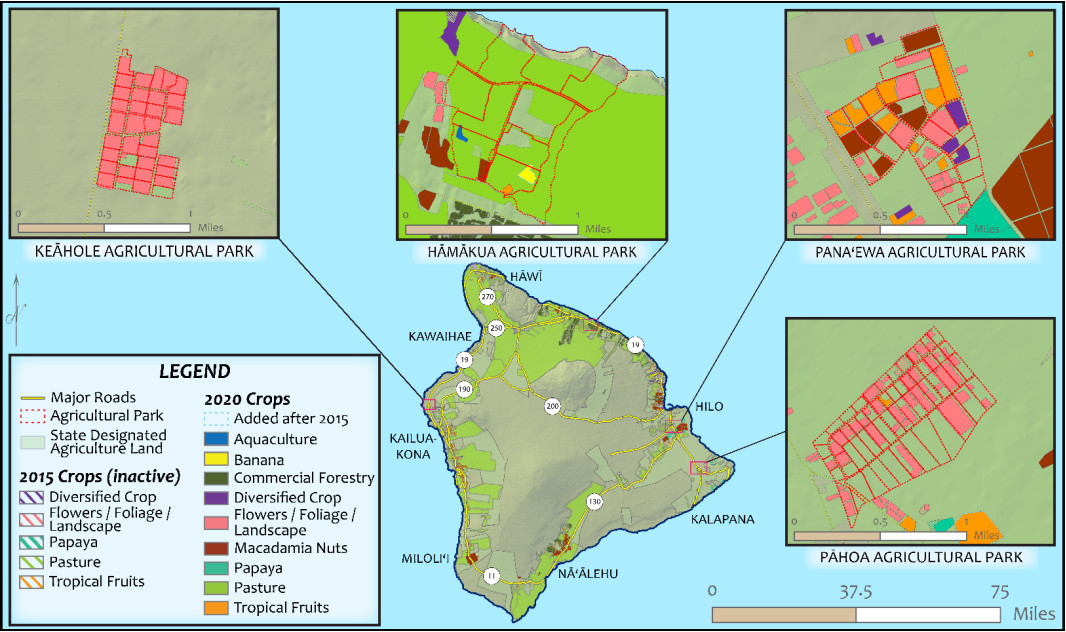 “Active Agricultural Park leases (red outline) on the island of Hawaiʻi,” from the Hawaiʻi DOA 2020 Agricultural Land Use Baseline Study

On Hawai`i Island, total agricultural acreage was 614,552, a drop of 891 acres (-0.14 percent) from 2015. During the past five years, the island has been challenged by natural disasters, including adverse weather and volcanic activity. In addition, island agriculture contended with invasive pests such as the coffee berry borer and spittle bug.

The 2018 eruption at Kilauea Volcano’s East Rift Zone covered about 1,000 acres of productive agricultural lands in Puna, which included diversified crops, horticulture, macadamia nut, papaya and tropical fruit farms. Despite those losses, most of those crops gained acreage during the survey period with diversified crops gaining 1,076 acres (+33 percent), papaya gaining 640 acres (+25 percent) and tropical fruits gaining 167 acres (+5 percent). Acreage in dairy production dropped about 1,000 acres due to the closure of Big Island Dairy in 2019. The survey did note the first return of sugar cultivation to the island with 14 acres in Hawi that is part of a distillery operation. 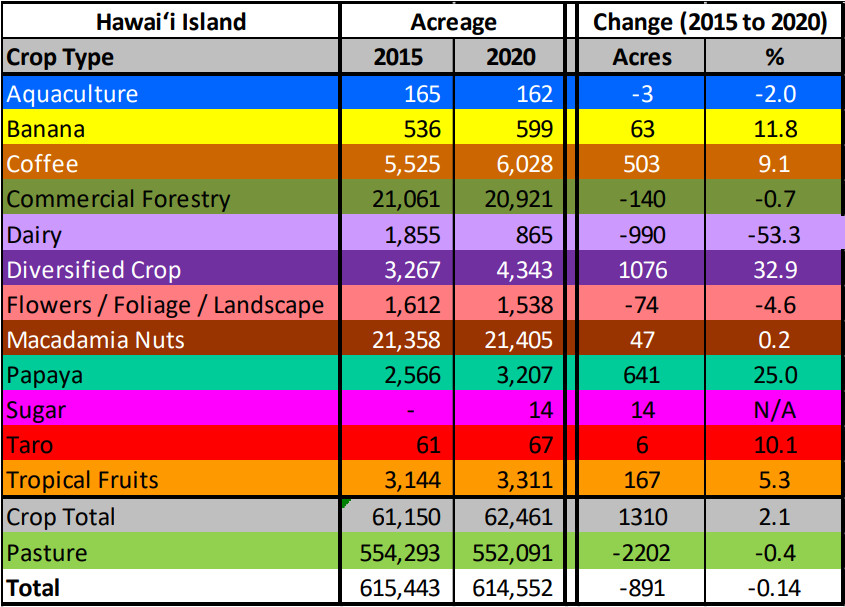