Global cropland could be almost halved

In the context of trade-offs between land use and biodiversity, LMU geographers have simulated land saving potentials for agriculture. With rising global demand for agricultural commodities for use as food, feed, and bioenergy, pressure on land is increasing. At the same time, land is an important resource for tackling the principal challenges of the 21st century – the loss of biodiversity and global climate change. One solution to this conflict could be to increase agricultural productivity and thus reduce the required cropland.

In an interdisciplinary model-based study, LMU geographers Julia Schneider and Dr. Florian Zabel, together with researchers from the Universities of Basel and Hohenheim, have analyzed how much land area could be saved globally through more efficient production methods and what economic effects – for example, on prices and trade – this would have.

As the authors reported in the journal PLOS ONE, their modeling showed that under optimized conditions up to almost half of current cropland could be saved. As a result of increased efficiency, the prices for agricultural products would fall in all regions and global agricultural production would increase by 2.8%.

“The starting point for our work was a current scientific debate as to whether it is better for protecting biodiversity to cultivate more extensively on more land or more intensively on less land, with all the respective pros and cons,” says Schneider. “In this context, we were interested in the actual potential to take land out of agricultural production and what economic effects the implementation of such land saving would have.”

To answer this question, the scientists used a process-based biophysical crop model for 15 globally important food and energy crops to analyzed what land saving potential could be obtained by agricultural intensification. For their analysis, they assumed that the yield gap between current and potentially obtainable yields can be closed by 80 percent through more efficient farming methods – such as the efficient use of fertilizers and the optimization of sowing dates or pest and disease control – and that the overall volumes of agricultural products should correspond to today’s output.

Almost half the cropland would be sufficient

The authors come to the overall conclusion that under these conditions the current global cropland requirements could be reduced by between 37 and 48 percent. Regionally, the land saving potential varies: In Europe and North America, for example, there is little land saving potential, as farming is already heavily industrialized and the degree of intensification is very high. “Depending on the established farming system, the maximum possible yields are almost reached in some cases,” says co-author Zabel.

“In regions such as Sub-Saharan Africa by contrast, current yields are mostly well below what would be possible based on the local environmental conditions and with optimized farming methods.” According to the model simulations, this is also the case in India and parts of Latin America, albeit to a somewhat lesser extent there than in Sub-Saharan Africa. More efficient production could therefore lead to large land saving potentials in these regions.

Regarding individual crops, the researchers identified particularly large land saving potentials above all for grains such as sorghum and millet, which are currently mainly cultivated by smallholder farmers in regions with large yield gaps. However, for cash crops such as oil palm or sugar cane, which are already cultivated very intensively, the model showed little land saving potential.

As their next step, the scientists integrated the regional land saving potentials into an economic model developed by the Universities of Basel and Hohenheim, in order to investigate the economic effects of the cropland reduction.

“This revealed that the more efficient use of land would lead to a fall in prices in all regions and for all crops,” says Schneider. In some regions, this could have a positive effect on food security. Yet, the simulations showed that the increased efficiency would in turn motivate the farmers in some regions to increase their production, causing the global production of agricultural goods to rise by 2.8 percent.

Strongest economic effects in regions with high pressure on land

There were big variations in the economic effects of land saving between the investigated regions. “Surprisingly, we discovered that the strongest economic effects – that is, the largest changes in prices, production, and trade flows – did not occur in the regions with the largest land saving potential, but in densely populated regions with high pressure on land, such as in Malaysia and Indonesia and parts of South America.

In these countries, land is a particularly scarce and therefore an expensive resource and thus makes up a big part of the total production costs,” says Schneider. Through globalized agricultural markets and international trade, the effects of land saving could be experienced in spatially distant regions. Globally falling prices, for example, could lead to an increase in imports of around 30 percent in the Middle East and parts of North Africa, as they become cheaper than domestic production.

The calculated potentials for land saving could serve as a starting point to assess the potential for alternative usages of freed-up land, such as carbon sequestration through afforestation and reforestation to mitigate climate change. By quantifying the carbon sequestration potential on saved land through the recovery of natural vegetation, the researchers found that additionally between 114 Gt and 151 Gt CO2 could potentially be sequestered on the saved land. For comparison, annual global emissions are currently around 42 Gt CO2. Other options for alternative usages of the saved land could be the cultivation of bioenergy crops or the protection of biodiversity, e.g. by setting up nature reserves and similar measures. 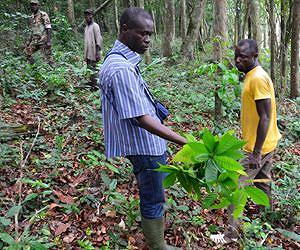 
Ivory Coast on Friday hailed a major reduction in the loss of forest cover as a “real success” after the massive spread of cocoa plantations over the last 50 years.

The world’s largest cocoa supplier, accounting for more than 40 percent of global output, Ivory Coast boasted 16 million hectares under forest in the 1960s.

Today forests cover only two million hectares in the West African nation, according to government statistics.

90 tons of bacon topping recalled because of metal pieces